A probable location for ‘The Serenity of the River’

On the August 14th blog ‘The Serenity of the River’ I asked if anyone knew the location on Cowan Creek where the C1900 black & white photo was taken.

This suggestion is further supported when you view the 2005 photo(below) taken by keen photographer Ros Mort at approximately the same location as the early photo.

Thanks Neil and Ros

The Serenity Of The River

This photo from the State Library says it all.The seated man in the foreground with a boat down behind him adds a certain focus but the water dominates the scene and holds your attention fully.

Do you know where this photo was taken? Share the information with us please

Image Courtesy of The Past Present
http://www.australiaspastpresent.com

The image above is an idyllic view of Berowra, a place of fun, leisure and relaxation. In the foreground, a man enjoys a day on the water, casting his line and waiting to see what bites. Fishing has long been a popular pastime at Berowra though, and drew crowds from the city on a regular basis to try their luck. In fact, so popular were Berowra and Cowan Creeks that they were regularly mentioned in fishing reports in newspapers, including papers like the Sydney Morning Herald!

Do you have memories of fishing at Berowra or Cowan Creek – or perhaps a story about the one that got away? We would love to hear your memories!

A Postcard Paints A Thousand Words 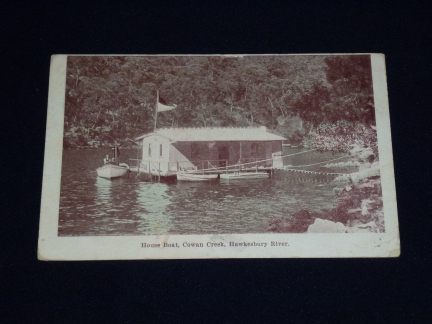 Recently, I was away for the weekend, pottering through the wonderful antique shops of the Kangaroo Valley when I stumbled across a range of postcards relating to our beautiful area. One of these postcards, shown above, focussed on the popular Windybanks business, showing the houseboats on Cowan Creek which Windybanks was so famous for. Others focussed on areas slightly further afield, such as Ku-ring-gai Chase, areas which visitors to and residents of Berowra alike would no doubt have made good use of.

Postcards provide a fantastic glimpse into the historic past of areas, particularly those which appealed to tourists. We know that many of the businesses in the area even sold postcards during the tourist heyday. If you have any such postcards, please let us know!

Ever since I can remember, there have been rumours of sharks in Berowra Creek. Many scoff at such suggestions, but throughout the European history of Berowra, there have been several ‘eye-witness reports’ of shark sightings.

The following exciting account of a shark sighting was reported in The Register (Adelaide) on the 20th of June, 1922, just over 91 years ago today!

As I sat in the Giant’s Castle contemplating the beautiful water of Berowra Creek, just above Collingridge Point, I heard a stampede and scramble over the rocks and through the bush, and a large wallaby jumped into the creek with a splash that frightened the bream, and sent the wavelets splashing against my little boat, half drawn up on the sandy beach that fronts the cave. I had no time to reflect as to the happenings that caused a wallaby to take to the water, but soon realized the situation. He was followed by a fierce dingo, that was going to beat him in the swim for life, when, all of a sudden, the dingo disappeared beneath the water. By that time I was in my boat, and as I passed over the spot where the dingo had met with his master, streams of blood, mingling with the blue wavelets, came up from the deep. The wallaby was saved by the shark and soon reached the shore again. – Aloren, in The World News.

The World Might Not Be Your Oyster But Berowra Is 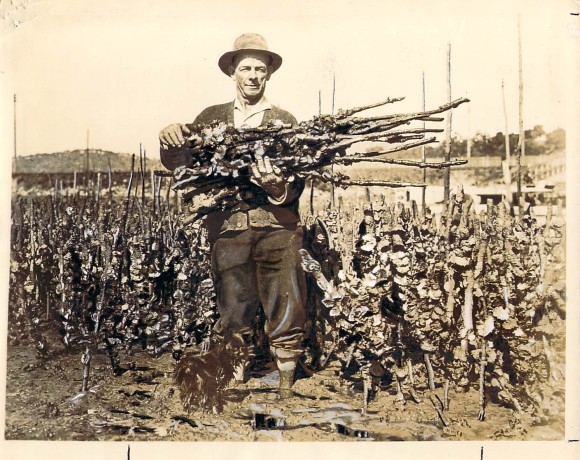 Today, many people know the Brooklyn area, and the Hawkesbury River as oyster farming areas and most realise that there is a long history behind the oyster leases, though today this history is under threat due to disease. Oysters remain a popular seafood though, and the oysters grown in the Hawkesbury area have long been known for their quality and flavour.

Most do not realise however that once, Berowra was also known for its oysters. People came from far and wide to collect the oysters growing wild in and around Berowra Creek and, of course, it was not long before people started to grow them commercially. There were several oyster leases being tended at Berowra Creek from the late 19th century well into the 20th century. The image above, of a Hawkesbury River oyster farmer and his oysters, gives an idea of the way oysters used to be farmed in the Hawkesbury/Berowra area.

Fishing has been a popular recreational pursuit in Berowra for many years. There is even ample evidence that the area of Berowra Waters was used for catching fish and collecting oysters by the Aborigines, with midden deposits common and engravings of fish to be found by those who keep an eye out! In the days when Berowra Waters was a popular tourist area, fishing was one of the many activities which was catered for, with boats of people taken out to try their luck.

Peter Huett, who lived and worked on Berowra Waters recalls a character from Berowra’s past, and the memorable fishing trip he once treated his customers to: