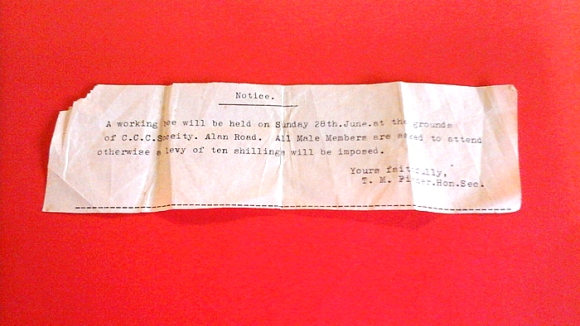 We invite you to apply your detective skills to this MYSTERY NOTICE!

It was uncovered in Berowra not so long ago. Spot the typo. Does anyone know what the C.C.C. Society was?

Clubs, groups, teams and societies all form part of the fabric of a community. The C.C.C. Society was for men and women it would seem and existed at a pre-decimal currency period. The typewriter was fairly heavily pounded by the Hon. Sec. as is seen by reversing the original and looking at the full stops.

Perhaps this society still exists. Perhaps you can tell us something about it….

A June Mystery – Is It Near Or Far?

Recently I rediscovered the following among my mother’s photograph collection.
It has the notation-    January 1933    Station between Newcastle & Sydney 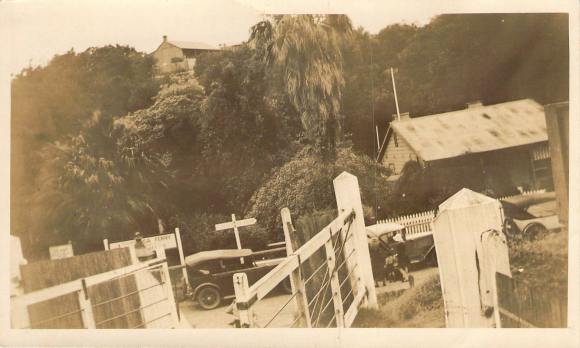 At previous viewings I had thought the image somewhat uninteresting but looking at it again I found it draws you in to check out the various things included, such as the sign posts, the buildings,the vehicles and trying to work out where the photographer was standing.

Can you identify the Station? 70 years on, would you like to submit a current photo for this scene? Maybe you can tell us more about this scene?

Do you know what it is?

Living in Berowra in the mid 1930s was a man named Bob Murray.

He married a woman whose maiden name was Mosley. When the marriage failed Bob went and lived in a very large cave west of the railway line.

This cave became known as Bob Murray’s Cave, my old stomping grounds. At the entrance of the cave Bob erected a small aqueduct over the watercourse, which became the threshold you had to pass over to get into the cave. On the horizontal slab he carved a single word.

This piece of broken stone we believe is a section of that slab – the spiral forming part of that word – can you guess what the word was?